Hiya, Silver Wolf here, with some information on this week’s prize until next Thursday, and the new Hub Island! I’ll be giving an overview of Hub Island, but I’ll also give a theory I have about it, which may be completely wishful thinking, or it may lead somewhere.

Note: this is a brief description and the island guide will be coming soon, along with a guide of Poptropica.

Just the other day, out of nowhere, Hub Island, or Home Island, was added to the map! Basically, the tutorial section is similar to the beginning island on Poptropica Adventures. You go into the tutorial by talking to the Poptropican in the pilot costume on the bridge.

You’ll then be taken to a tutorial, where you find 8 shards scattered throughout the area to form a medallion. Of course, the medallion is yours! While there, you’ll meet a Poptropican that will show you how to customize your character by giving her a wrench.

Outside of the tutorial, you can also enter three buildings, one called “New You” that lets you randomize costumes you can wear and colorize your skin and hair (which didn’t stay for me), another that when entered takes you to the Poptropica Shop, and the last one called “Arcade,” letting you go into the island’s Common Room: 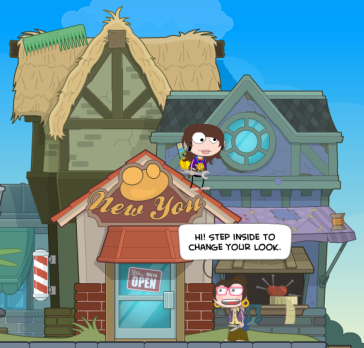 Something I noticed was when I came from Timmy Failure Island and landed on Hub/Home Island, there was this under the bridge:

So I’m wondering..why? I understand it may just be there to help, but since they know most people probably won’t go back to the Hub Island again unless they wanted to use the colorizer (which didn’t work for me), then why would they have that there? Now, a long time ago, in Poptropica’s livestream they mentioned having a house for Poptropicans. Since this island is also called Home Island (which may just be because it explains how to use Poptropica), I’m thinking maybe, just maybe..a home feature will be added? Whether it is or not, I’m not giving my hopes up.

Something I also wanted to include was that I recently Tweeted Poptropica about adding a search feature to the Poptropica Store (which I think everyone wants by now) on August 6, since finding a certain item is sometimes frustrating because there are so many. It’s been a long time, so I have a feeling they’re not going to answer:

Since there are more items in the Store now than ever, will a search feature be added soon? Sometimes it's hard to find items. @Poptropica 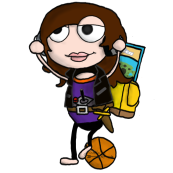 It would be nice if they did, though! I also wanted to mention that I’ve been wanting to change the background for awhile now, but I haven’t been able to find out how to solve a glitch in the platform that won’t let me change it. Luckily, today I was able to contact someone who works at WordPress and they said they will email me with more details soon. Lastly, I made a DeviantArt account at SilverWondalfy, and I recently posted about a drawing I did of my Poptropican, which you can see to the left. Anyway, that’s about it. 😛