Mighty Zeus, king of the gods, needs a hero – and he wants you! To satisfy Zeus, you’ll need to battle monsters, swim the depths of the ocean, and descend into the mysterious underworld. Will you emerge a hero like Hercules, or face the fiery wrath of Zeus and his thunderbolts?

When you land on Mythology Island, enter the Museum of Olympus, on your left. There, you will briefly learn the story of Zeus, Poseidon, and Hades. Walk to the right and get the starfish off of Poseidon’s statue. If you’d like, click each statue to learn a bit about each of the main gods.

Exit the museum and go to the Tree of Immortality. Do you dare venture up the tree and eat an apple? Climb the tree and speak to the satyr (half man, half goat). He will ask you to collect his honey hidden around the tree. You have 60 seconds to collect 10 jars. It might take a couple tries, so don’t give up! After you give him back his honey, a secret path with appear. Follow it to the golden apple above.

Pick the apple and Zeus will appear. Thankfully, he will spear you if you find the items he is in need of. The mighty god will give you the Sacred Items Scroll (BTW: each item on the scroll you get, part of a message is attached). Shouldn’t be a big deal… right?

Music to My Ears

Leave the tree and the old lady outside will transform into Athena, daughter of Zeus. She will give you advice when she can. All you have to do is look for the olive trees. Go back, past Main Street, to the Grove of Temples. Enter the Temple of Apollo and pick up a free reed pipe. Find the goddess with a flute/reed pipe and she will teach you how to play (just click the same notes that she plays). You will receive sheet music, which will help you later on.

Exit the temple and go down to Hades’ temple. Help the boy that is there clean up the graffiti and he will award you with one Drachma (coin). Next, enter Poseidon’s temple and place the starfish you got on the offering table. The door will open, leading to Poseidon’s beach. Talk to Aphrodite and she will give you a magical mirror if you past her test.

You have to name each god she shows you (and you only have 3 misses). This test will be a lot easier if you read the statues in the museum earlier. If you just want the answers now, here you go: 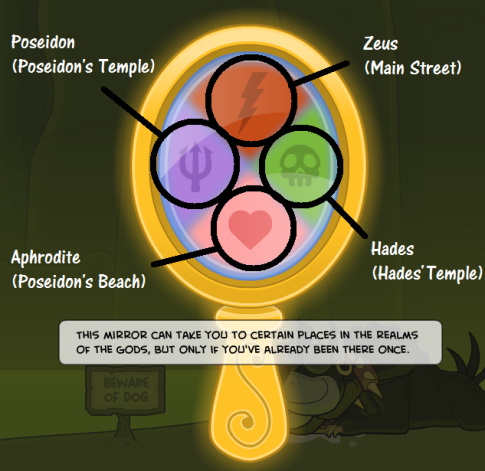 The mirror will take you to the realms of the major gods… and Aphrodite, but only if you have already been there. 😉

Time to take a dip. Dive down in the ocean to enter an underwater maze. Collect bubbles for air (if you run out of oxygen, you will have to start over) and try to make your way to the Hydra’s chamber. You’ll have to swim all the way to the right and down. There are a lot of dead ends. Anyway, go into the cave where you’ll find the Hydra. To defeat it, what for the right moment and jump, landing on its heads that try to strike you down when you get to close. When all the heads are knocked out, get the scale, one of the five sacred items. 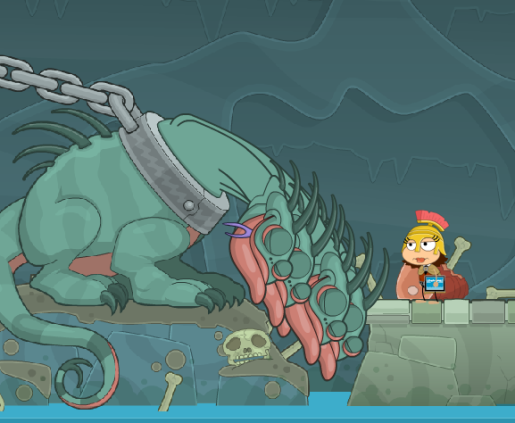 Go back to the maze and right above the cave entrance is a clam. Wait until it opens and get the pearl in its mouth, one of the five sacred items. Now use the mirror to return to Main Street (lightning bolt).

Head past the Tree of Immortality to the Garden of the Sphinx. Everything is dried up! To gain the flower, you must pull the levers and lower the bridges for the aqueducts until water flows throughout the garden. After you get the flower, above the Sphinx is a tree of free pomegranates. Pick them up and then travel left, to the Minotaur’s entrance.

On the door are numbers and colors. Beside the door is an olive. If you click the olive, Athena says that music can open new doors. So, with that logic, pull out your reed pipe and play what the door says! Blue, blue, green, yellow, yellow, red, blue, green. 🙂 Enter and talk to the Minotaur. He says that he will give you his nose ring if you can find your way through his labyrinth. Enter if you dare… Athena will give you magical, glowing gold sting to help you from getting lost. Heck, we’ll help you too. Here’s a map:

Credit goes to the PHB.

Somewhere along the maze you will find yourself among some bones. You have to take away 6 from 15, but leave 10. Instead of the amount 10, take them away so TEN is left, as in the maze picture above. At the end of the labyrinth, there is one more challenge you must face. In a carving on the wall, there are snakes that pop out. You have to click the red-eyed snake three times to open the final door. This game is kind of like Whack-a-Mole, so just try your best! 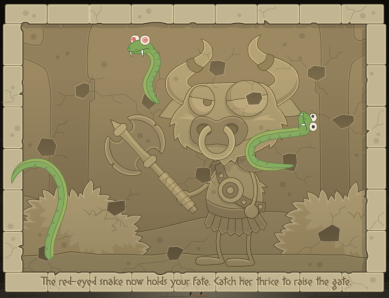 Exit the maze and claim your reward: the Minotaur’s nose ring.

Go back to Hades’ temple, in Grove of Temples. Use the pomegranates as an offering, and step inside the Underworld. To get to Cerberus, you must travel across River Styx. While on the boat ride, move left and right to dodge falling stalactites, duck to avoid flaming skulls, and jump to get away from an approaching river monster. Basically, don’t fall off the boat.

When you reach Cerberus, play the tune that you you were taught on your reed pipe to put the dog(s?) to sleep. The tune is blue, green, yellow, blue, red, green. Get the whiskers and get outta there!

Go back to the Tree of Immortality and return the five sacred items to Zeus. Now, you might be thinking that I’m about to say “Congrats! You’ve completed Mythology Island!” Sadly, I can’t just yet. Zeus tricks you and steals the items without giving you immortality. And the message you decipher from the items is “Whoever wields the five sacred objects will rule all of Poptropica!”

Ugh. Time to resort to asking Hercules for help… go to Herc’s Hero Hut on Main Street. He will be lazy, but since you have Aphrodite’s mirror, he will give in. Teleport to Poseidon’s realm first. Hercules will crash the loose stone so you can enter Poseidon’s throne room. Talk to the mighty god and he will give you his trident. 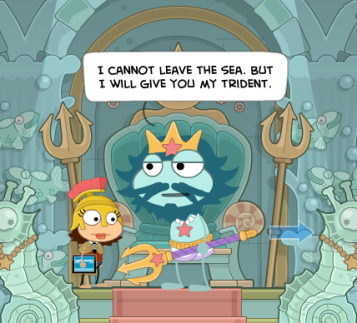 Next, go to Hades’ realm. Herc will move the bolder away from the throne room door and you can go inside. Talk to Hades and he will give you his crown.

We don’t exactly know what to do with the crown and trident yet, but apparently we will know when the time comes. Take Herc and travel to Zeus’ realm. He will brake the lock on the gate and you can begin your hike up Mount Olympus. Yikes! A snake blocks your path! 😛 Hercules, trying to be the man, goes to take care of it, but it turns out to be Medusa. He gets turned into stone and you must continue without him.

Using your Drachma, buy a bag of wind, which will help you fly to the top of Mount Olympus. If you fall, don’t worry. Free refills! Anyway, time to face the mighty Zeus… *gulp* Walk past each Zeus statue and the lights will come on. Zeus will come out and you will put on Hades’ crown and wield Poseidon’s trident. Fly around and click to shoot lightning bolts at Zeus. Dodge his attacks and collect clouds to stay floating.

Once you beat him, Athena will reward you with the island medallion. Congrats! You’ve completed Mythology Island! And it’s for real this time. 😉

Mythology Island is one of the few select islands to have a Player Map! Visit this link, and you can see everyone who has ever completed Mythology Island (in order of their completion). You can even narrow it down by country and state and view your own ranking! Here’s an image of what it looks like: