When you land on Virus Hunter Island, go to the right of Main Street, past the video shop, and into the fitness center. Now, go to the left, past the pool, and click on the stretchy bands next to the weights. One will snap and give you a Resistance Band. 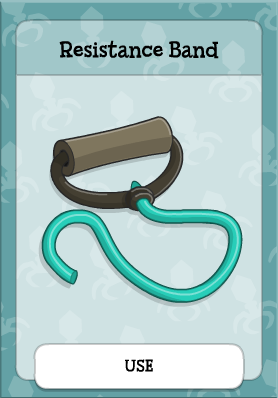 After you get thrown out, go to the bus stop. Climb up onto the nest and use your Resistance Band. Now, climb up and talk to the weird guy.

He says he thinks the government has set up shop where he’s at, and he wants you to go check out one of their vans. Leave the guy and go to the left, past the apartments, and over the brick wall.  Talk to the guy in the “Pizza Delivery Company aka PDC” truck. He’ll run away, and you’ll get a bag of Shredded Documents.

Now, run right and go back to the person on the roof. Piece everything together and go to the video store. Here’s what all of them should look like:

When you finish putting the shreds together, use the PDC ID badge that the guy on the roof gave you. 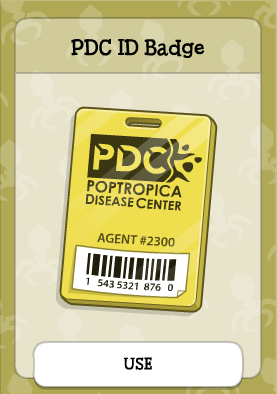 Enter the video store, show you badge, and go into the Staff Only area. Go down the elevator and talk to the lady with the goggles, Dr. Lange.  Um… what’s wrong with Dr. Lange’s assistant? Is she doing the Gangnam Style? Just kidding – she’s only typing.

Anyway, talk to Dr. Lange, who will tell you your badge is a phony, but she wants you to volunteer to help stop the virus. So you say yes, she shows you what the virus can do, and it’s REALLY creepy. She’ll type up a Dossier and also give you a Camera to record Joe Stockman (Patient Zero). 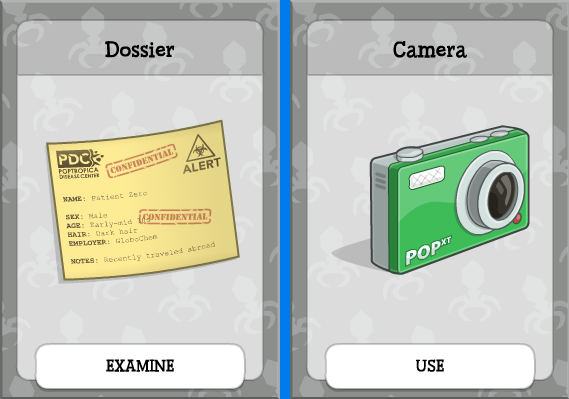 Leave the video store and go into that apartment building again. Rummage through the trash bin, and click on a couple different letters that have the name “Joe Stockman” on them.

Then go to the falafel place to the far right past Main Street. (Go right two streets until you see it at the very end.) The guy there says he has a huge order at Globochem. Now go to the Globochem Chemical Lab on Main Street. Run behind him when the panels open and go to the top floor. Talk to Joe and use your camera.

Now go back to Dr. Lange. Next, follow her, and she will reduce your size so small you’ll be able to fit inside Joe’s body. Now you’re doing a tutorial on what you should do inside the body. Here are the instructions:

Once you get inside Joe Stockman, go to the bottom right of his stomach and shoot this green thing with the special gun, and his ulcer will be cleaned from bacteria. 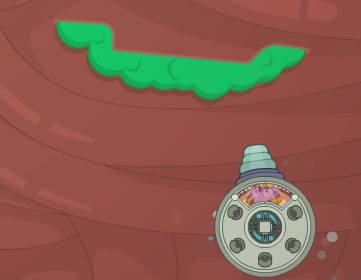 Now click a muscle in thin air near it and go to his right arm where it’s infected. Go look for the viruses.

The viruses take all your weapons away but will leave your gun. Now you need to find those weapons to continue. Go back into the blood stream, click the stomach (below the heart), and go up his esophagus.

Now you get out of your ship and go on foot. Ride these bubbles up to the top and head right.

Keep heading right until you reach a gold tooth. It has your shield on it!

When you reach the end of it, go down. You will reach the scariest thing in Poptropica ever!

Once you defeat this virus, you’ll get your laser scalpel back! Now, you’re able to cut through things!

Go right and cut through some fat/tissue and go into the bloodstream. Click on the heart and cut through some tissue when you get there. You will encounter another virus to fight! Make sure you’re using your laser scalpel, and rush to stab the virus when its “legs” are wide enough for you to go through. Be careful, you’ll lose health if you let the legs touch you. You can regain your health by hitting the blue or red cells!

Now, go back into the bloodstream and go to the right hand side. Shoot all the tissue hemorrhages. 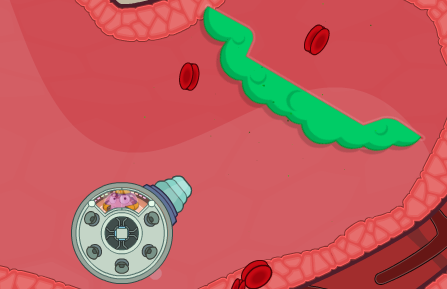 After you do that, go back into the bloodstream. Go into the right arm/elbow and shoot all the tissues. When you finish all of them, go right at the end. Some viruses will come after you, and you’ll need to fight them off and shoot the tissues around you with the Coagulant. (refer to above picture for what the tissue looks like)

The viruses care about hurting the tissues more than hurting you, so shoot the tissues until they turn green, then shoot the sacs where the viruses come from (there’s two). When you finish shooting the sac, kill the remaining viruses that are trying to hurt you. Then shoot all the sacs again, and you will get the Electrobolt.

Once you get the Electrobolt, shoot the blue nerves while you’re leaving. It relieves Joe (Patient Zero) of his pain. Now go back into the bloodstream.

From there, go to the brain. When you get there, use your Electrobolt to get rid of the blue nerve. You’ll see this beastly virus that looks like it came out of a horror film. 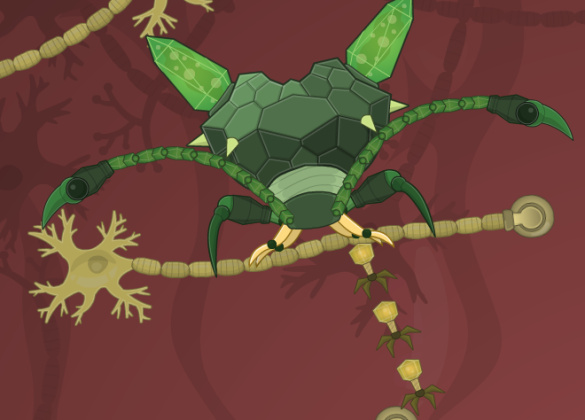 Now here’s the tricky part. Your weapons don’t hurt the big virus. (However, you can defeat the little viruses it sends in your direction with your laser scalpel.)

Go left and use the Electrobolt (remember to press the space bar) with the blinking neuron. After it lets go, it will follow you. Connect it to the next one and so on until it reaches the virus and shocks it. Each time the big virus is shocked, it will move to a different area, and you’ll need to keep connecting the blinking neuron to the neuron the big virus is sitting on.)

Shock him 5 times and you’ll get the Gravity back. Now, use the Coagulant and shoot the tissues. After that, go back into the bloodstream, and into the mouth.

Once you’re inside the mouth, go down under the bottom teeth. You will reach the cavity. Keep poking it with your laser scalpel and the cavity will go away.

After you do that, go into the bloodstream again, and return to the heart. Go to the last place where you fought the virus. Continue going up, and go right, and enter the center of the heart. (The last virus you fought was right on the outside of the heart). When you get inside the heart, there’s another virus. Keep hitting its arm while it’s on the alveolar sacs, which will eventually fall off, and the virus will explode.

Once you take off all the virus’s arms, Joe will sneeze you out and you’ll get your medallion from Dr. Lange! Congrats – you’ve completed Virus Hunter Island!

Go to the Knave’s landing. A dog will run away from its owner. The owner will say that her dog, Belle, has been acting strange ever since she ate rubbish from the trash. She’ll ask you to help her dog, and you will get what she ate out of – it’s something with the PDC’s initials on it!

Go to the PDC lab and talk to Dr. Lange. She’ll tell you about why the dog has been acting in a frenzy. It seems as if she ate the PDC’s heartworms, which were thrown away! (Ugh,not again!)

So you get out and go to the falafel place.The guy will give you some leftovers. Feed them to Belle, and you’ll be in the dog’s body. Now, near her upper canine teeth, there’ll be some wounds. Cure them with your curing thingy. Go right. There will be two green long swiping things, probably a result of the heartworms. Speaking of the very devil, the heartworms are blocking a tunnel down right.

You will have to hit the thingies first with your gun to make them disappear, then the heartworms will go. But not all of them! Continue right through a tunnel to a stomach. Use the laser to go through the fat, and go through the ‘Pop Chow’ by shooting it with your gun. Soon you’ll reach a tunnel for the intestines. Go through it.

You will be in a maze of nerves. There will be nerves of different colors which will open paths with the door of their same color, but may close another one with the same color. Go through that and experiment with it. Kill all the green swinging things with your gun. After you reach a dead end, go back through it and exit. Then go and exit the stomach.

Then the heartworms will stop blocking the passage, and you can go into the lungs (yes, already). There will be smaller lungs with-YA!!!! GREEN SWINGING THINGS EVERYWHERE!! THEY MOVE THEMSELVES FROM ONE HOLE TO ANOTHER!!! YOU’VE GOTTA STOP ‘EM!

So you shall have to shoot at them from near their holes. They may escape from one hole to another, but then just switch holes! After you shoot all of them, a small tunnel will open up. Go through it for the final final battle, this time in the heart. When you enter, you’ll meet the center of the heartworm. Shoot at its four parts till it sprouts.

Shoot at the sprouts from a safe distance. Then the white cells will finish it off! The heartworm is contained! A blue tunnel will open up which will take you back to the mouth. Then, exit the mouth, and you’ll arrive back safely on Main Street. The girl will thank you, and Dr. Lange will reward you with theAce Pilot costume. Congrats, you’re done!