You’ll start off by the triumphant return of the Poptropica blimp as you find yourself on a tropical landscape. Go the right and you’ll run into a man trapped in a tree in a hot air balloon. His name’s Octavian, and he needs your help in getting him down. He’ll pass you a corner of the Map he has.

This map is essential to go places during the quest. You can access it by either following one of the signs on the edge of the screen or directly in your inventory.

Open the map and select the camp. You’ll traverse places Indiana Jones map travel style and you’ll find yourself at a camp a random Viking made. Yes, there are Vikings here, nothing special. Go a bit to the left and grab the Shovel.

Next, head back to the jungle via the map and go to the right until you end up at a beach. Go over to the mound of sand by the Viking ship and use the shovel. Upon digging through the sand like a pro, you’ll find a Viking Battle Axe. Return to Main Street, and use the axe to get Octavian down.

Go back to where you found him and use the axe on the tree. You’ll chop the tree down and as you make your way to talk to Octavian, you’ll grab some Rope. Upon talking to him, you’ll realize that the map he gave you was only a piece of a larger one that showcases all of Poptropica. He claims to be robbed of the rest of the map by his “traveling companions” and he believes them to be at the Viking fort “selling it off”. He promises to split any proceeds he finds with you as he runs off.

You should get into the Viking fortress to investigate these traveling companions, but you can’t just walk into the front door. You’ll have to enter the garbage chute and to do that- you have to make a moat for the Viking fortress. You already have one part of how to make that happen, the rope. The next thing you’ll need is gunpowder.

Go to the camp again, and you’ll notice that the Viking guarding the camp is now asleep so you can check out the entire area now. Not too far from the campfire, there’s a bag of Gun Powder. Go ahead and grab it – the Viking is not going to notice because he’s busy taking a nap.

The final part of the process is for you to get a lens. However, it’s not as simple as swiping the gunpowder. First, go to the Viking Fortress and over to the garbage dump to the left. A fancy golden Goblet will drop out. Grab it- you’ll see why in a bit. Go to the waterfall and go into the water. Click use on the goblet and you’ll hold it in your hand. With that in hand, click on one of the fish swimming around and you’ll scoop it up with your goblet.

The lens is over in the Dodo area. Go there and you’ll find Dodo birds being protective of their territory and guarding their nests. To lure them away, use the fish right by where the animal bones are and all the dodos will come chasing after the poor fish. Go up to the top nest and grab the Lens. 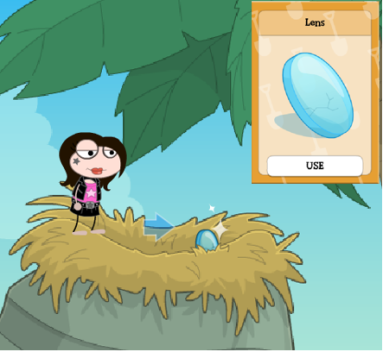 Go back to the waterfall, but this time, jump your way up to the top of it. You’ll find a rocky area with a bunch of rocks on the left that look like they’re ready to fall. First, place down the gunpowder. Then, place down the rope. And finally, use the lens to direct the sunlight towards the rope, causing an explosion that’ll cause a rockslide. Upon jumping down, you’ll realize the rockslide redirected the river, which means you can get into the fortress now.

Go over to the fortress area and swim to the left. Use the Battle Axe again to chop down a tree in order to access the garbage chute (gross). Enter through it and you’ll find a Viking demanding you to serve drinks to everyone. Go a bit over to the right and click on the drink tray. First, pass over a drink to the big guy, and then pass the rest to the other two Vikings at the table.

While the big Viking is eating at the seat, you can grab the coat of Furs hanging off his chair. You can’t put it on now, but you’ll see what’s up later. Go back to the kitchen and grab the bucket of Drippingsthat is on a shelf over the fireplace. Also gross. Grab the drink tray again, but this time, use your goblet and put it on the drink tray. Go over to the left and enter the throne room of Erik the Red.

Erik the Red will accuse the Vikings standing before him of stealing his goblet and he just wants someone to hand it back, no judgement. He’ll then close his eyes and count in order to give them a chance to confess. Pass the drinks out to the Vikings and you’ll give the goblet to Thorlak, the Viking at the front of the line.

When Erik turns around, he’ll see Thorlak, the Viking carrying the large goblet, and feel utterly betrayed. Despite his promise of “no judgment”, Erik unleashes his fury at Thorlak and tries to throw his Viking helmet at him as he runs away. Go ahead and pick up the Helmet. You can’t wear it now, but again, you’ll need it later.

Your servant duties are done now. Go all the way to the right into the pig pen area. There, you’ll see Octavian, the man from before, insist to a trio of kids to give him back the map. That trio of kids are the protagonists from the graphic novel: Mya, Oliver, and Jorge.

Speaking of, if you have read the graphic novel, you are probably already aware of the fact that Octavian is not a nice man. You’ll hide behind a bale of hay as Oliver gives Octavian the map. Despite the kids pleading him to be let go from the cage, he ditches them because he already has what he needs. Slipping on a disguise, he then runs off.

A guard will then come over and taunt the pigs with slop. Use the Drippings on the guard and he’ll be covered in the stuff, causing him to be chased by a stampede of pigs. Karma’s annoying, isn’t it?

Go over to the cage and use the battle axe to break down the wooden door keeping the kids in the cage. Jorge will thank you by giving you an already bitten Candy Bar.

Oliver and Mya note that they can’t just leave the fortress like normal – they need a disguise. Luckily, you have one. Use the Viking helmet and you’ll place it on Oliver’s head. Then use the gigantic fur coat and you’ll put it over Jorge. The four of you will then stack together to make one tall Viking disguise. 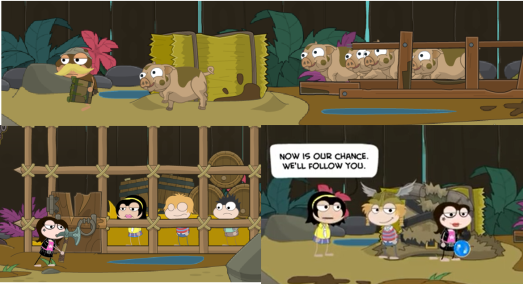 As the role of the legs, it is your objective to make sure the four of you stay balanced as you head over to the garbage chute. Move forward a little bit at a time; wait for Oliver to tilt slightly forward, move forward a little, wait, move, and keep doing this to until you reach the garbage chute at the end of the hallway. Be careful not to be too unbalanced (it’ll be indicated by Oliver’s facial expression), otherwise you’ll have to start over.

Upon reaching the garbage chute, the real big Viking will arrive and you and the kids will be busted. The three of you will escape through the garbage chute and ride the log down the river. Now it’s time to find Octavian before he leaves the island! 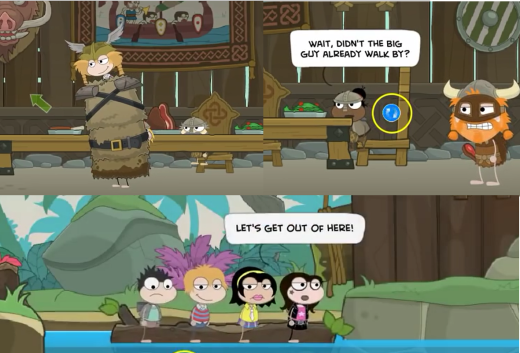 Escaping the Vikings and Finding Octavian

You’ll end up in a chase scene down the river, and you’ll have to dodge the rocks as you go downstream. However, another obstacle comes in the form of the large Viking hurling boulders at you. A good strategy to use is to keep to the left of the screen to give yourself time to notice the river rocks, and allows you to more easily dodge the Viking’s thrown rocks.

You can only take 4 boulder hits before you have to start over – each boulder hit knocks out one of the kids. After a minute of successful dodging, you’ll be able to escape by falling down a waterfall.

Upon landing, you’ll find Octavian just about ready to leave and he proclaims that no one can stop him from leaving this island and therefore having everyone else be trapped on this island. You’ll notice the Dodos also wandering around right nearby. In order to get Octavian away, use the candy bar Jorge gave you, and you’ll toss it to Octavian. The Dodos, loving food, will then go up to Octavian and chase him away from the scene.

The trio will thank you and offer you to join them on their journey home, but of course, you have your own adventures in store. As thanks anyway, Mya will give you the medallion. Congratulations, you’ve completed Mystery of the Map Island! 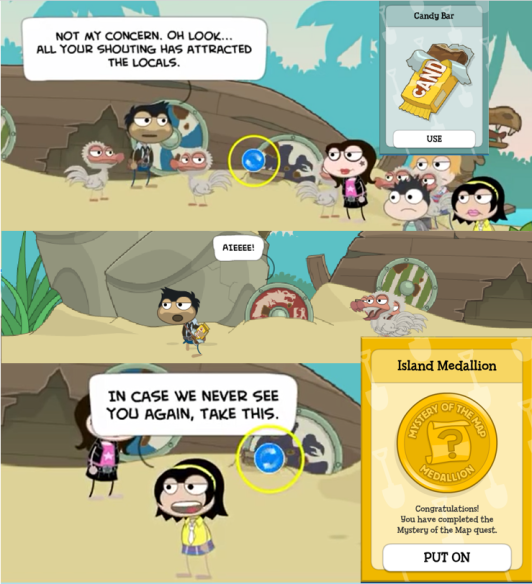