Hey guys, I know it’s been a while, but winter break is here, so hopefully we will post more often! 😀 LOTS of updates, so let’s get started. FYI, some of these updates are probably a bit old.

Let’s start out with the big one: Galactic Hot Dog Island. The trailer is now out, along with the Tour Page.

From the hit graphic novel comes the zaniest Poptropica adventure yet. Hop aboard the Neon Wiener for an intergalactic voyage with Cosmoe, Humphree, and Princess Dagger!

The Tour Page oddly indicates that this island will not have episodes. At least, the episodes aren’t included on the page. On that note, episodes will soon be no longer:

Well, I personally didn’t like the episodes, so I’m perfectly fine with this. What about you guys?

Anyway, back to GHD Island. Two new store items will soon be out. The FRED Follower is free and the Galactic Space Suit is only for members.

Along with the GHD items, a new Arabian Nights item is now out for members! It is for members only and entitled Plundered Armor.

Other than that, the Creators have released another behind the scenes image.

Also, Jeff Kinney was on the Today show! Be sure to check it out! Mainly Diary of a Wimpy Kid related stuff. 😛

END_OF_DOCUMENT_TOKEN_TO_BE_REPLACED

Hey guys just a quick post to let everyone know that Shrink Ray (SUI) will be out for everyone on December 4, which is this Thursday! And remember that the Shrink Ray Gun is free in the Poptropica Store!

In other news, since the release of the Poptropica App on Android, the amount of downloads has been amazing! Nearly at a rate of 6,000 per day! Now that’s pretty cool.

It’s a bit more difficult to tell what this sneak peek is for. Along with the image, the Creators said “We too get that busy, overwhelmed, confusing feeling.” That also doesn’t give anything away, at least not for me. However, the font used in “AHHHHHHH!” looks like it may be for Galactic Hot Dogs. What do you guys think? Comment below! 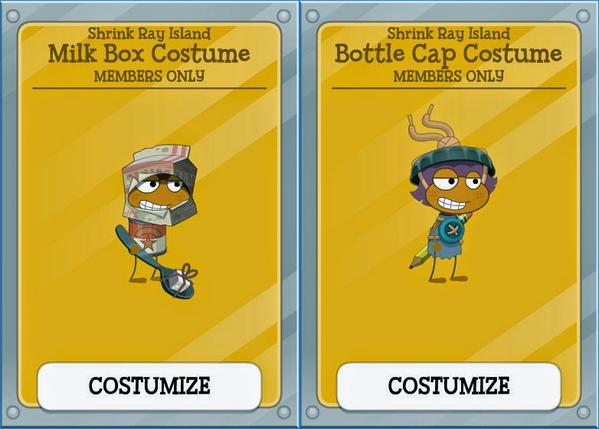