Hiya, Silver Wolf here, and we have two big announcements! Plus, a little bit of oldish news for you guys. As you can tell, the post is about Arabian Nights Episode 3 and the New Chat Options! I’ll also be talking a little about Nabooti Island and the Credits raise. Keep reading to find out more! 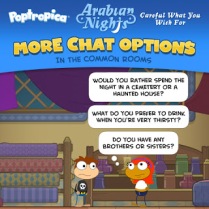 If you’re like me, you’ve probably gone to Common Rooms…a lot. And if you’re really like me, you also know how frustrating it is when…you get the same exact chat option as before. Yes, if you’re dedicated to Poptropica, you’ve probably ran into this problem before (unless you don’t like Common Rooms, which is fine, too). Well, the pain is over! Like Black Widow said, “Now, another one of your wishes has come true. We’ve just added dozens of new chat options to Poptropica common rooms!” You can see some of the new options to the right. They include:

And others? Well…you’re just going to have to play Poptropica yourself to find out! And if you’re wondering what the heck a ‘Common Room’ is, they’re rooms where you can safely chat pre-made messages with other Poptropica players, play games with them, and friend them! Most of the Common Rooms are on the first street you land on in Poptropica.

Arabian Nights: Careful What You Wish For Released for Members!

Yep! That’s right! FINALLY, Arabian Nights Episode 3 has been released to Members only. Hopefully it will be released to Non-Members soon, but with Nabooti being only available for Members right now, nobody’s exactly sure. Here’s a description of the island if you would like to know more about it first:

The genie is out of the bottle, and now everyone wants a chance to make their wishes come true. But whether you’re a greedy merchant, a lovelorn palace guard, or a Sultan with a long-buried secret, heed this advice: be careful what you wish for!

Make sure to also visit the Arabian Nights Champion Map so you can see all of Arabian Nights’ winners! As always, you can also look up your friends’ ranks and look at your own. Tomorrow I’ll try to make a list of the Top 10 Champions and maybe make a review, if I have time. 😛