Let it go, let it go, can’t hold it back anymore… Unless you were born today, you’ve probably heard about Disney’s Frozen, possibly now one of Disney’s most iconic modern movies. I mean, we’re still hearing about it in 2016 from over 3 years ago! There’s that, and plus it is winter, so what could be better?

Sometimes there’s such a variety of fan creations, it can’t be put into one category. Well, we have a piece of art, YouTube video, and Realms! First up is a EPoptropica version of Elsa drawn by TamamoMae:

It looks pretty cool! I think the eyeshadow was a nice touch. Next is a Realms creation with Frozen’s Elsa and Anna in multiple costumes (thanks to the PHB)! 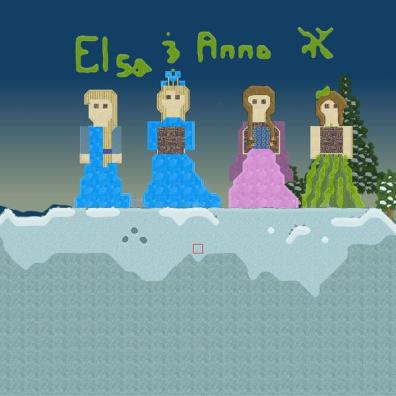 I’ve always liked what Anna wears better than Elsa; I like blue, but not too much blue. Lastly, a YouTube video by Sienna Nading that smooths right into the next section, showing how to make an Elsa costume:

If there’s one thing I’ve found out that Poptropica fans don’t lack, it’s Elsa and Anna costumes. These first two are from Fearless Rock’s Blog: 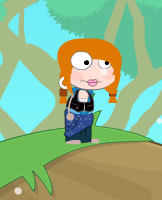 I think those two are some of my favorites. The next are from the Poptropica Fashion blog:

I like how they made the costumes match each other! Poptropica Fashion Wiki is back again with some more great costume of Elsa and Anna (and a Queen Elsa, sadly with no instructions):

All three of those are really unique, especially Anna’s hair. Lastly, an attempt by me at making Elsa:

Here’s where the random, fun stuff comes in! For example, what Poptropica post was made the day Frozen was released? Well, on November 27th, 2013,  a post about Forgotten Islands was made by Captain Crawfish!

Looks like if anything was forgotten, it was the photo. Of course, we can’t forget that as the wintry feeling goes, Frozen is closest to Wimpy Wonderland. Mainly because, well, snow. But actually, when you think about it, Survival Island is quite like Frozen:

You have to survive the cold and you’re isolated from everyone else. Sound like someone…? It’s a lot like Elsa when she ran away and built a tower for herself. And Martin Van Buren is like the citizens that want her to pay. Anyway, that’s all for today!

Anyway, that’s all for today! If you have any future Mashup Monday suggestions, or if there is something I missed, comment it below!