Hiya, Silver Wolf here, with some Poptastic Updates! I would like to note that this is replacing this week’s Mashup Mondays, but there will be one next week. 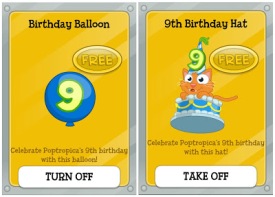 Now, I love cats, and so I’m pretty excited for Poptropica’s 9th birthday items… The 9th Birthday Balloon of course, and a hat with a cat in it (it even wags its tail)! So cute. Like last year’s 8-bit pig item, this year’s is also a play on the birthday number.

Poptropica’s birthday month is September, so they probably won’t be in the store for much longer! A little extra info is that Poptropica had a birthday party at their HQ, including Jeff Kinney. Looks pretty fun to me. I mean, cats! 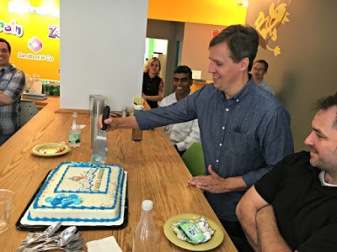 Island of the Month + Credits

If you haven’t found out already, Poptropica has increased the credits when completing an island for the first time of completion from 150 to 300! If you continue to replay, you’ll get another 100 credits each time.

It seems as if the hints for the two new IOTM are video walkthroughs being made for them on Poptropica’s YouTube channel. If that’s right, October’s IOTM are Monster Carnival and Mythology:

They’re pretty fitting, since many Halloween costumes revolve around monsters, and I’ve seen quite a few of Greek gods. Happy early Halloween, by the way!

Congrats to all the winners! And I would like to say, I wish it was better quality, but the pencil & paper drawing is by me, so woo!! Next, from Facebook:

I really, really love the colors of some of these and their imagination. Congrats, everyone! Lastly, 10 more from Twitter…

Again, congrats to everyone! There are some pretty known Poptropica community members in this one, including Slanted Fish, Craft Poptropican, Brave Tomato (with 2!), and…our very own Shaky Skunk!

Yep, it’s that time of the year (my favorite): fall! The costumes have a lot to them, but that just means more opportunities for costume combinations, right? Anyway, they are 275 each for non-members (so get spinning and completing islands!) and they are free for members. They boys’ and girls’ outfits are both on the right.

That’s it for today! And yes, next time Mashup Mondays will be over Steven Universe. 😉