As usual, lots of popping news to catch up on! First up, Poptropica Realms is now out for members!

We will provide more info after we’ve checked it out. 😉

Also, the official Galactic Hot Dogs Island Trailer is now out! We previously only had the teaser to look at.

The island will be popping up on the map for members on January 29 and on February 19 for nonmembers. However, the Creators to want to mention that these dates may change.

Besides the new trailer, GHD has a new paper craft as well! It is the Neon Wiener spaceship paper craft. 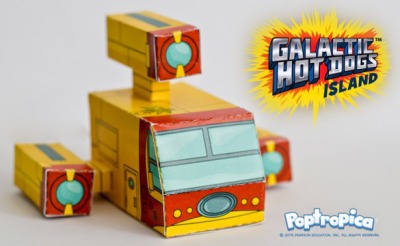 You can find and print out your own on the island’s Tour Page, or in the Poptropica Store.

In other news, the Creators’ Blog has been a little modified. Not much, but it now matches Poptropica’s updated look.

Lastly, I would like to give a shout-out to Pixel (Nice Dragon), who completed Early Poptropica Island 1000 times! Now that’s impressive! 😀

Art kid whose way too old to be playing Poptropica, but doing it anyway.
View all posts by Spotted Dragon →