Click on that picture for full size. And I can’t really make my own video because I’m not allowed to upload to YouTube right now (Thanks Mom!), but I found one, thank you Poptropica Creators!

Listen to that music! Wowzers, I love it. The game has lots of glitches, including the Mancala glitch, where you have to switch tabs for the turn so it won’t freeze…  Now, onto the Islands.

There have been 36 Poptropica Islands released in 2013. How many will be released in 2014? I hope more. I started calling this new version of Poptropica, “The Decision”. Because, new players have to decide whether they like this way or not. Older players even have to as well, and I don’t like it. You should be able to make MORE decisions. I’ve heard people around the blogging world complaining, and I thought that maybe we should get the decision between the new and old version of Poptropica. Whether “Bigger and Louder”, or “Small and Quiet”, I’d like to choose! How about you?? Do you want a choice?

I helped HPuterpop find out somethings in the Trash Can of Mocktropica… Why always the garbage? Why can’t we look through something else?!?! Oh well, the Poptropica Universe may never know 😛 Anyways, I was looking through the trash can, and I sorted out all of the pictures that were there, at least the ones that looked important. Here’s the pic: 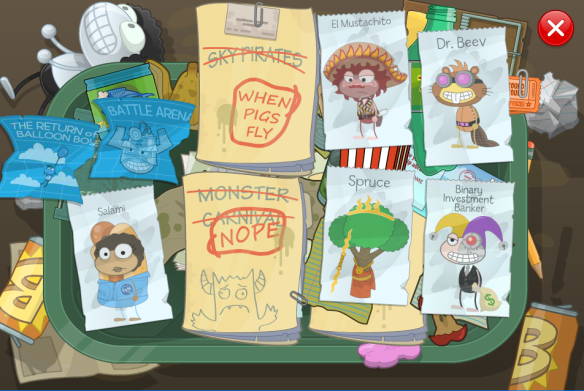 NOPE!!??!?!?!?!? WHAT DO THEY MEAN BY “NOPE”?!?!? I’ve been waiting on this Island since I started playing Poptropica! Grrrrrr, stinking Creators…

I like the Main Island Character Ideas though… Maybe we were GOING to send a Hot Dog into space, or battle an evil plant with lightning bolts, or keep a beaver from taking all of the wood on “Woodya Wanna” Island… But thankfully the Creators came up with better ideas 😛

Now, you see, I’m not the kind to make long posts, so I’ll have to make another with more things I’ve found 😛 Maybe not…

So, let me say one more thing: Mocktropica was MADE for this glitch 😉

I'm probably being distracted by something shiny as you read this.
View all posts by Queen Hannah →

4 thoughts on “Poptropica… One Year At A Time (But only the most recent one!)”