Hello! This is my first sneak peek with pictures. It took me a long time to do this, so I hope you enjoy it! Now, I think most of these pictures are from a mall, but you probably will think different. Some of these pictures are………. interesting. For example, the picture below this text. Well, that’s it.

A cat always lands on its feet.

The Poptropican of the year can be found right here.

I think this is from a mall, possibly. This has no relationship with that cat at all, so I’m wondering what the creator is thinking. Also, you can’t see this, but the thing I underlined said, “FotoBoof.” I’m pretty sure it is spelled, Photo Booth. What do you think? I don’t know what to say.

You’ll love what you find inside.

To me, the dog is REALLY creepy. Well, this could be from a mall too. It would be a prank store, though. For example, the POP CANZ and DOG-E-DOO kind of gives it away. 😉

This evil HQ is under construction.

First, I would like to start off saying that HQ means Head Quarters. Also, the guy they used isn’t one of he creator’s characters, so could that be the “evil” villain? Surely they could do better. This LOOKS like it is in Zomberry Island, but it’s not. Maybe just maybe, this could be a supply room in a mall. The blueprints are big enough for one. I’m still not giving up on the mall theme!

This also could be in a mall. I have a funny feeling that somehow, we are supposed to get into the “Employees Only” room. I don’t know, it’s just a suggestion.

You’re never out of sight of security.

What I find weird is that on the screens, it is showing the same thing………. This should be a security room for a mall. If the next island is a mall, I don’t think I would like it. Why? Malls are way to………. BIG.

I don’t know where this would be. One of the funny things, though, is that one of the people is named Rudolph. I guess the creators are in the Christmas spirit! I don’t get the “Game Over” cards. It doesn’t make much sense. 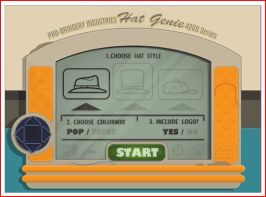 And then, even more hats on.

This could be in a hat shop… in a mall. The cool thing is that you can choose the color by your tribe or by Poptropica. You can also choose a logo. Cool. 🙂

The look you want in a spray you can use.

I don’t know where this would be, but isn’t there enough things you can use to color your skin? It’s starting to get ridiculous. Well, I guess it’s some kind of machine you need to use for later.

That’s all folks! Make sure to comment on what you think! 🙂 I hope you have a merry Christmas and a happy New Year! Good luck to all of the people waiting for Zomberry Island, it’s pretty hard. 😀 ~SW